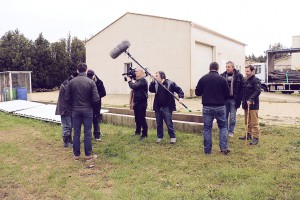 This last theme is reflected in documentary film productions about work: the study of cinematographic strategies in the documentary approach and analysis of work situations.

Since 1997, the laboratory has been developing a thematic focus centered on the filmed activity of work, in partnership with several French companies: Eurocopter, La Poste, the Luberon Regional Natural Park, and the Conseil Général of the Bouches-du-Rhône. Today, the work of LESA mobilizes around ten researchers and PhD students on issues as varied as: internal mobility and the transfer of experience at Eurocopter (2004/2011); skills and know-how at La Poste (1997/2008); the role of park wardens among the local population of the Luberon Regional Natural Park (2008/2011); parenthood links in host families at the Conseil Général 13 (2011/2015); the establishment of the first AMAP (an association for maintaining small-scale agriculture) in PACA; short distribution chains in organic farming; and land pressures in semi-urban areas.

Each film is created by pairs of filmmakers/social scientists, who aim to question the functioning of our organized society and also try to find solutions for the film’s participants that are adapted to their problems

Find out more or adjust your settings.

This website uses cookies so that we can provide you with the best user experience possible. Cookie information is stored in your browser and performs functions such as recognising you when you return to our website and helping our team to understand which sections of the website you find most interesting and useful.

Strictly Necessary Cookie should be enabled at all times so that we can save your preferences for cookie settings.

If you disable this cookie, we will not be able to save your preferences. This means that every time you visit this website you will need to enable or disable cookies again.

This website uses Google Analytics to collect anonymous information such as the number of visitors to the site, and the most popular pages.

Please enable Strictly Necessary Cookies first so that we can save your preferences!